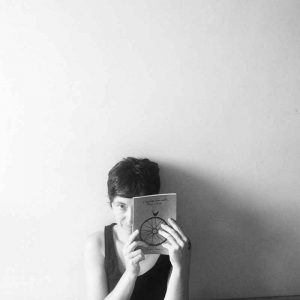 Being unsure of where I end and the universe begins, I write stories and make books to discover the places in which borders go missing. My body of work is biographical and overly intimate – a movement to cross over to the other side of myself, find the ultimate mirror, tear my consciousness apart and land back into the innocence of an empty shelf.

Published work: I published O mundo sem anéis (‘The world has no rings’, Portuguese,162 p.) in Dec/2015, in Brazil. O mundo is a 100-chapter diary-like narrative on the 100 days I biked solo through France, Spain and Portugal, in 2013, and was warmly welcomed by Brazilian readers – the first edition is currently sold out.

I am currently writing my new book provisionally named ‘A spiritual diary of weird feelings’ that comprises of 108 narrative exercises on the possibilities of intimate discovery within solitude. The book is due 2020/2021.